In recent years, news keeps popping up on the decarbonization of the economy but always leaving out any questioning of the model of constant growth that currently directs the destiny of our societies. Some go even further and use the dogma of technological solutions as a basis for talking about a decoupling of economy and natural resources, postulating, contrary to any natural principle, that we will be able to grow indefinitely in terms of goods and services we offer and consume without any significant impact on the ecosystems we inhabit.

However, the reality of the situation clearly contradicts these proposals. We are all aware that the transition to renewable energies and the gradual electrification of various sectors comes together with an intensive use of raw materials, in particular certain metals that are indispensable for such technologies. We also know (or should) that in parallel with this expected increase in demand for raw materials, new mining projects are being launched, including some that could have very serious environmental consequences, such as deep sea mining, others that are now hiding old destructive practices behind the oxymoron of sustainable mining and even extravagant ideas such as asteroid or lunar mining.

Recent studies[1] show that mining activities aimed specifically at renewable energy production will exacerbate threats to biodiversity across the globe. It is estimated that up to 50 million km2 of the earth’s surface could be affected by these extractive activities, including protected areas and some of the few remaining wilderness areas on the globe. The immediate consequences are already known: soil degradation due to acid mine drainage, deforestation, water stress and pollution. It seems like energy transition continues to ignore the fact that extractivism is no longer a viable strategy to ensure the well-being of our societies and the conservation of the environment. 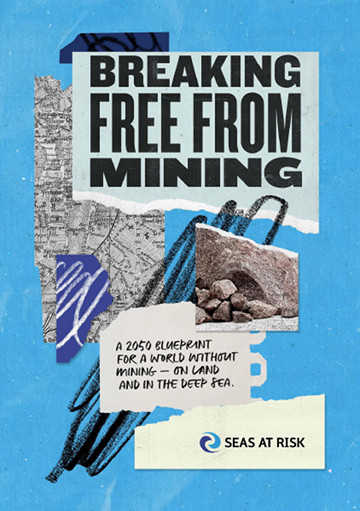 While global elites responsible for major decisions have come to accept such a contradiction due to their lack of audacity, most people are confused by a constant trickle of natural catastrophes and biological events of global scope that plunge us all into a disturbing dilemma: are we capable of imagining a better future or are we imprisoned by dystopian visions that stifle our ability to act? Imagining a better future is the exercise proposed by Joám Evans Pim and Ann Dom (Seas at Risk) in the recently published report Breaking free from mining. In this painstaking work, the authors make us cast off from the gripping present towards a 2050 in which a truly transformative change has already taken place. They take us into this propitious future and investigate how we got there, what changes were necessary, what key decisions had to be made, and how close we had to come to the abyss to finally pull back.

With a successful combination of rigor and imagination, the report presents a detailed review of the most recent bibliography and the most revealing data published by organizations such as the World Bank, the International Resource Panel, the International Energy Agency or the Organization for Economic Cooperation and Development to come to the conclusion that the scenarios proposed by these institutions cling to a kind of techno-optimism that avoids questioning the current model of constant growth and entrusts our fate to the cards of efficiency and innovation.

However, as the authors show, technological solutions will never be enough. Most are short-term and superficial, and in many cases have proven to simply reinforce the extractivist paradigm in order to sustain a form of green growth that only benefits overdeveloped countries and regions. The demand for energy storage systems to harness renewables, electric vehicles, digitization, urbanization and a general increase in resource consumption among an ever-growing population all highlight the unsustainability of a system wedded to GDP growth as the only possible benchmark of what it means to be a prosperous society. The key question then is: are we capable of imagining a more viable model than extractivism?

The answer may be closer than we think. Many of the seeds of change that the report talks about are already taking root. Timidly, perhaps, but events such as the COVID pandemic are having a sensitizing effect that is likely to promote change sooner than we may believe. Initiatives in the field of circular economy, technology, efficiency and innovation are important steps in the right direction. But real change must go deeper. It will have to challenge existing economic structures and move towards an economy focused on sufficiency rather than efficiency, on controlled deceleration, on the well-being of all peoples and on a fair and equitable distribution of resources.
From this possible 2050 future, the report reviews some of the fundamental changes that made us get there. Changes in energy production and consumption, in mobility systems, in planned and perceived obsolescence, waste management, new ways of thinking about cities, the rural world, housing and, in broader terms, a new way of living space and time that is more human, far removed from many of the pathological conceptions of today’s world.

In the field of mining, the report stresses the importance that secondary raw materials will have in the future, that is, materials recovered from electronic waste, construction waste, urban landfills… This is what has been called urban and landfill mining, an avenue worth exploring at a time when the amount of some metals already extracted from the subsoil is equivalent or even greater than the amount that remains unmined (i.e., this is the case of copper, 50% of global reserves of which are already on the earth’s surface). In our drawers and landfills lie forgotten huge amounts of metals that could alleviate the need to mine the earth.

The report abounds in essential references that draw an evidence-based scenario, proposals and readings of a current society without veils, without smokescreens, without blatant greenwashing strategies. Sustainable mining, ecological compensation and other recent terms barely hide positions installed in a failed model that has only served to benefit a global minority. Extractive activities destroy the environment in which they work. There is no possible compensation when destruction involves child labour, deadly working conditions, exploitation of people and human rights violations. It is obscene to see how the mining lobbies and corporations pressure politicians to open up new sacrifice zones with empty promises of job creation, progress and development that at the end never materialize.

As a personal contribution to the comprehensive work by Joám Evans Pim and Ann Dom, I would like to point out to aspects that I believe will have to be taken into account in the coming years. The first refers to the innovation policies of the European Union and the funding associated with them. Programmes such as Horizon 2020 and institutions such as EIT RawMaterials have been funding projects related to raw materials with little or no real interest in promoting environmentally viable solutions. Rather, such projects seem to be looking for new peripheries within the European Union from which to extract the little wealth that still remains. Its actors, in most cases representatives of the mining industry accompanied by regional politicians who act as ambassadors for these corporations, use a worn-out discourse that blames citizens by trying to make them see that more and more mining is necessary to satisfy their material needs. How many times have I heard the fallacious argument that mining on European soil is necessary because we all want to have a mobile phone in our pockets!

The second reflection I would like to make refers to some of the current proposals that aim for a future with simpler lifestyles, where consumption is based on sufficiency and not on exorbitant levels as at present. Some of the most common ideas include reducing working hours and work days, changing from car or home ownership to shared use, reducing travel, repairing rather than buying new products, and so on. But it worries me to think that these same proposals that should work in a better future for all can become dystopias for a part of the population if distorted under the neoliberal paradigm. Will these ideas become a life in precariousness for a part of society (without stable jobs, without access to housing or basic goods, without access to leisure activities) not as a result of a choice but of a growing inequality? How can we distinguish when we are defending an idea that will lead us to a better future from one that, under the same appearance, only exacerbates precariousness in a dual society of affluent and consumerist middle classes on the one hand and lower classes at constant risk of poverty on the other?

What seems clear is that the dirt under the carpet is not technological, but political and social, of coexistence and values. There is no technological solution that will straighten out the consequences of a political and economic model ruled by the principles of constant growth and competitiveness. Are we then capable of imagining a better future for all? In my humble opinion, I believe that we should not think of a utopia to reach, but a world to work for with perseverance and conviction. As the sociologist Hartmut Rosa warns in his work Alienation and Acceleration, “the logic of competition and acceleration has no internal brake or limit”. Max Weber also spoke of this absence of internal brakes or limits when he affirmed that capitalism would not come to an end before “the last ton of ore is fused with the last ton of coal”. We cannot sit and wait for the end of an economic order that by itself will not be able to stop. That is why it is so important to act, starting by mentally ridding ourselves of paralyzing dystopias and daring to imagine. 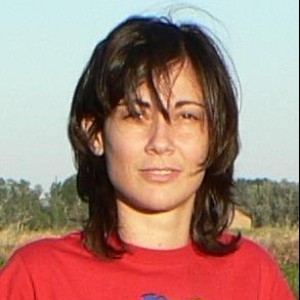 PhD in Physics from the University of Valladolid. As a researcher, she worked in the field of advanced materials for sectors such as construction, health and food. She has subsequently developed her career as an expert in science communication, proposal writing for European research and innovation projects and analysis of the impact of scientific and technological developments on the economy, society and the environment.

[Pedro Prieto]I would suggest that they analyse why conventeaiser to extract) is falling irremediably. Perhapwill arrive, and finally, that of all liquid

Alberto Garzón: "The main virtue of degrowth is to state that the objective is to scale

(Originally published at the author’s blog.) I start this post by referring to the IPCC report

In times of climate crisis, the future is a territory to defend

[Red de Futuros Indígenas] Facing a climate crisis that threatens our future on the planet,